The Beauty of a Moment

“Okay, Jacob, now you are going to step on the shovel, like this.” I demonstrated by placing my foot on the heel of the shovel and shifting my weight to push the shovel farther into the dirt. I attempted to make every movement dramatic and obvious, for Jacob is a 10 year-old, undiagnosed autistic boy.

Jacob took a few tries to succeed in pushing the shovel deeper. “Awesome job!” I encouraged. “Now push the handle down to scoop up some dirt.”

Jacob pulled the shovel straight out of the ground, leaving all the dirt behind. “That’s okay, Jacob. Let’s try again.” I demonstrated again and turned him loose in freshly rotor-tilled dirt to experiment with his brand new tool.

A few minutes passed until I heard Jacob proudly proclaim to the world, “I did it!” I looked over and saw a small trace of dirt on his shovel.

During our next session, Jacob and I were walking around the ranch going from one planned activity to the other. We passed by the rack of landscaping tools next to the garden. “Are we going to shovel again?!” Jacob asked with a level of excitement that I rarely hear from his voice.

I briefly considered my planned activity with the small animals. “Sure!” I replied. We each grabbed a shovel off the rack and headed towards the dirt in the garden. We continued to shovel for the next 40 minutes of our session.

Shoveling dirt wasn’t on my original session plan for that day, but it was definitely on God’s.

Young Jacob’s growing joy and enthusiasm was a blessing to behold that day.

And just like in this story, our Heavenly Father “Gets Us!”  He meets us – and loves and accepts us — exactly where we are, whatever our strengths or weaknesses!

*Child’s name was changed due to confidentiality. 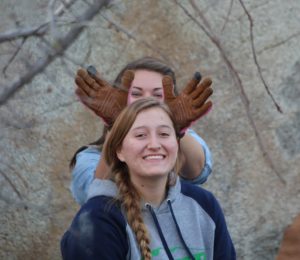 Co-written and edited by Stephanie Miller-Lacy